Non-alcoholic fatty liver disease (NAFLD) is estimated to affect 30% of the population and is a leading cause of abnormal liver function. NAFLD covers a wide spectrum of liver pathology ranging from fatty liver to non-alcoholic steatohepatitis (NASH), characterized by steatosis, inflammation, hepatocellular injury, and fibrosis. Hepatic inflammation, driven by liver-resident immune cells, is a critical component in the initiation and progression of NASH. However, the mechanisms involved in the recognition of these antigens remain unclear. We are investigating the role of B cells in the pathogenesis of NASH. 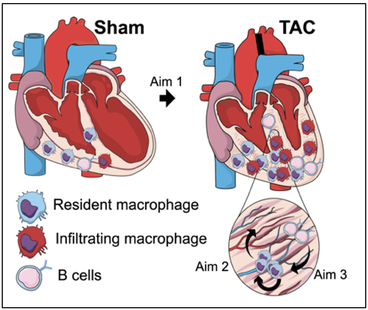 Cardiovascular disease and heart failure (HF) are leading causes of death as existing therapeutics are not successful in preventing a further decline in cardiac function. As a consequence, the survival rates after hospitalization for HF remain dismal at 50% in two years. Therefore, there is a clear need for research into the mechanisms underlying the development and progression of HF. Despite this progress, the signaling pathways defining physiological and pathological hypertrophy are ill defined. Recently, the focus has shifted towards cardiomyocyte-extrinsic mechanisms involving cardiac immune cells. Monocyte-derived macrophages (mj) and T cells have been identified as critical for the progression to HF. We study the mechanisms by which resident immune cells might regulate the earlier process of hypertrophy development and the immune pathways that control physiological and pathological hypertrophy.

3. The intestinal immune system as a central driver of obesity-related disease

Obesity is associated with dramatic perturbations of the gut microbiome, a condition known as dysbiosis. The intestinal immune system is emerging as an important modulator of obesity-associated metabolic disorders. However, the mechanisms by which intestinal immune cells influence the development of obesity and how the obese state affects gut immune homeostasis are unclear. The Peyer’s patches (PPs) are gut-associated lymphoid tissues distributed throughout the small intestine and are the major source of IgA-producing B cells. Our preliminary findings show that obesity induces an arrested differentiation and impaired function of TFH cells. Moreover, the germinal center responses in PPs and the production of IgA are decreased in obesity. Our current hypothesis is that obesity causes a disruption of TFH cell homeostasis leading to gut dysbiosis and metabolic disease. Our current goals are to determine the role of TFH cells in obesity-related metabolic disease and investigate the mechanisms by which obesity disrupts TFH cell homeostasis. 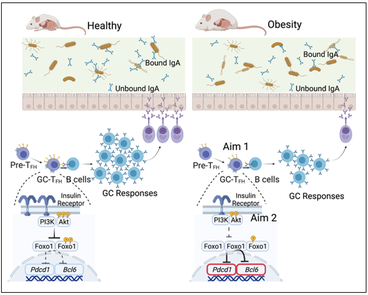